We all love the sacred art of smudging our spaces, our tools, ourselves, banishing negative energies and bringing in good positive energy. But did you know that there are actual scientific facts that prove that smudging with Sage creates negative ions which help change the molecular structure of both the air and energy which produces a real “cleansing effect”?

Smudging is an old and ancient practice used by witches and Native Americans where the burning of sacred herbs are used for cleansing and purification before ritual and ceremony. Smudging calls on the spirits of sacred plants to drive away negative energies and restore balance. In addition, herbs are used for purification and protection of the physical and spiritual bodies, clearing the home of unwanted energies, cleansing, healing, and banishment of negative energies.

Smudging with White Sage is said to release negative ions which has been linked in studies to increase the sense of overall well-being and heightened mental focus. Essentially, the smoke that is emitted from the smudge wand cleanses negative energy and purifies living spaces, objects and the physical body. Similar to washing ones hands, it cleanses with an energetic shower of sacred aromatic smoke.

Smudging with White Sage removes the debilitating effects of excess positive ions in the air in a way that has been described as a natural antidepressant. The smoke helps to change the molecular structure of both the air and energy which produces a cleansing effect. As the sense of smell is strongly linked to memory and instinct, smudging is highly effective for releasing anger, anxiety, fear, grief and depression.

Researchers found that charging the air with negative ions was an effective treatment and prevention method of depression, due to its effect on serotonin levels, similar to the way anti-depression drugs work. Smudging offers calming and relaxing effects known to help lower blood pressure, relieve tension and stress, normalize breathing rates, and may even help to fight off damaging free radicals that lead to premature aging and disease. Studies also found that negative ions produced by smudging with Sage can help normalize serotonin, the “feel good” hormone in the brain that can boost mental clarity, increase energy and improve sleep patterns.

Negative ions are created by the effects of sunlight and water, which is why we experience a sense of calm and overall well-being when we’re out in nature. In high concentrations, negative ions clear the air of bacteria, pollen, dust, pet dander, odors, cigarette smoke, viruses and mold spores. What happens is these negative ions attach to positively charged particles in the air such as germs, pollen, mold, becoming to heavy to stay airborne. These particles then fall to the floor, attaching to nearby surfaces, hence removing them from the air we breathe helping to prevent health problems like respiratory issues.

With all of our electronic gadgets, computers, cell phones, TVs, microwaves, as well as carpet, upholstery and even our clothing, our sacred spaces have become positive ion prisons. Additionally, in the 21st Century, we are dealing with outside threats like particulate matter, carbon monoxide, lead, sulfur dioxide, nitrogen oxide and also chemtrail matter, all of which gets on us and into our homes. That’s why placing negative ions in the air via smudging can be so beneficial in counteracting these harmful effects.

By smudging we can create that same positive energy found out in nature in our own homes, much like spending the day in the mountains, breathing in fresh air and the scent of nature among the pines, which studies show offer direct positive effects to reduce stress levels. Additionally, research published in the Journal of Ethnopharmacology titled “Medicinal Smokes” in 2006, found that the smoke from smudging with sage has the ability to cleanse the air of harmful ions.

The most frequent medical indications for medicinal smoke are pulmonary (23.5%), neurological (21.8%) and dermatological (8.1%). A large list of pathogenic bacteria has shown to be absent within a room after 30 days following the smudging treatment, leading researchers to conclude; “We have demonstrated that by using medicinal smoke that it is possible to completely eliminate diverse plant and human pathogenic bacteria in the air within a confined spaced.”

So there you have it! Smudging and clearing space with a simple White Sage smudge wand can really make a difference not only on a spiritual level, but it can also increase health and well-being. These are the secrets our Native American peoples have known for centuries. So grab a smudge wand and get to smudging! Blessed be –

HOW TO SMUDGE: It is recommended to take a few minutes before smudging to get some fresh air moving throughout your space. Open a window for ventilation. Meditate beforehand and do some deep breathing to prepare for this sacred ceremony. This allows you to shift your energy.

A White Sage Smudge Wand (available at whitemagickalchemy.com) We have many smudge wands to choose from.

An Abalone Shell or other heat safe sacred burning vessel such as an cast iron cauldron or ceramic smudge pot. Always place a bit of sand on the bottom of ceramic smudge vessels to protect the bottom. These are also available at White Magick Alchemy.

Matches – I prefer using wooden stick matches to anything else when smudging, however regular matches or a lighter will do.

Light the sage wand and gently blow out the flame allowing the sage to smolder. Focus your energy on the smoke. It may be necessary to re-light the wand during the smudging process. Use your hand or a feather to direct the smoke over your body moving from your feet up to your head, then back down to the feet. Stay focused and concentrate on your breath during the smudging ceremony. Visualize the sacred smoke vanquishing all negative energies from the body and within your sacred space. You may also incorporate a cleansing chant while smudging.

To clear the home, light the sage wand and begin in the eastern corner of your house, making sure to smudge each corner of your home. Focus on the corners of your home as they are said to accumulate the most stagnant energy. Continue to use your hand or a feather to move the smoke around. Visualization is key during the smudging ceremony. Don’t forget about closed spaces, closets, cabinets, rooms, basements, garages, laundry rooms, etc.

At each entryway, chant your intentions of clearing negative energy and smudge the outline of the doorway. Chant “May all negative energies be thwarted. All negative energies and negative people will not be able to pass through this entryway.” As you pass through each doorway, ask that the room be protected and sealed of all negative energy. Pass the sage smoke over the edges of each window and each door as you continue to work throughout your space. Once you have smudged your entire home, place the smudge wand in your abalone shell or smudge vessel and allow the bundle to burn out on its own. Never put a sage wand out my force. Always allow the sage to extinguish on its own. You may also choose to bury the wand(s) in your garden to complete the ritual.

Essentially it is good practice to smudge your sacred space at least 4 times a year. You can smudge weekly or monthly, after an argument, whenever you feel negative energy is building up in your home, or when you’ve been affected by a negative person’s energy.

Remember, negative energy fields can manifest as scattered emotional patterns, projects or goals that become delayed, spiritual influences, unbalanced sleep behaviors, headaches, all of this can result in us absorbing negative energies, sometimes without even realizing it. Whenever you feel a sense of unbalance or negativity, break out the smudge wand, hold ritual, hold space, and release that which does not serve. 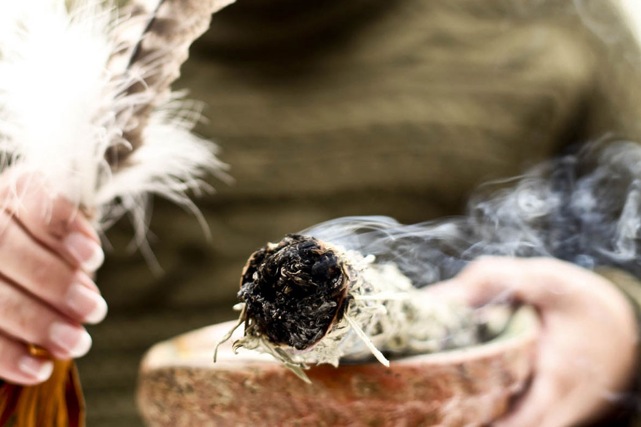